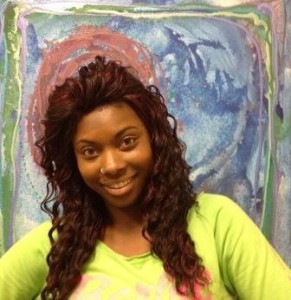 Bre’anna, 17, knows what it feels like to be afraid. Born in a small town in Illinois, she, her mother and her brother moved often throughout the state. When she was a freshman, the family moved to Chicago. Bre’anna enrolled at Collins Academy High School in North Lawndale, where she was introduced to UCAN’s 360° Model, and in particular, UCAN’s Phenomenal Woman group mentoring program for young women of color. “I was new to Chicago and the school was so different for me. I was really angry. The [360° Model services] helped me, especially Phenomenal Woman, where I met other young women going through the same things. It made me want to talk to women who are in my situation. It made me share my story.”
Bre’anna faced overwhelming trauma growing up, including rape, bullying and gang violence. It became so rough that Bre’anna contemplated ending her life. However, she says that UCAN staff and Phenomenal Woman peers helped her change her mind. “The group helped me realize I was a strong person. I absolutely loved my counselors; I felt like I had someone to talk to even when I couldn’t talk to my own mom, and I knew it would be confidential. Phenomenal Women taught me things that I probably would have taken for granted, but there I lived it, breathed it and embraced it. UCAN encouraged me to talk to other people in my situation and it empowered me.”
Bre’anna’s strength helped her achieve a 4.0 GPA and regular honor roll status in school. She plans to start college early, and will attend DeVry University to study networking and computer analysis. “I wanted a degree under my belt while I pursue a cosmetology certification. I then hope to go to Paris and pursue modeling and cosmetology.”
Talking about the past can be hard, Bre’anna shared. “I will never forget, and the emotional and physical scars will always remind me of my past. But I see the other girls react when they hear my story. They tell me, ‘you give me inspiration, you understand what I have been through,’ and often they start crying and hug me. That’s when I know my story is theirs too, and that in a way I am helping them.”