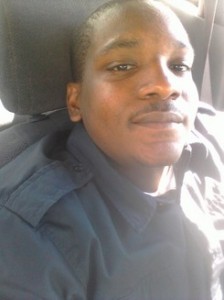 We’ve all heard that your life flashes before your eyes in
the moments before death. 20 year old Johnny Banks has lived it. In October 2012 Johnny was shot. A single bullet passed through his wrist and into his chest resulting in a collapsed lung. He was in the hospital for nine days. For Johnny, it was a life changing event.
“I realized I was alive so that was the best part of it. It just taught me I had to change and start focusing way more.” Johnny, who dropped out of high school in his sophomore year, faced felony charges for Marijuana possession and selling drugs. He served time in jail for 10 months.
Shortly thereafter Johnny joined UCAN’s Transitional Living Program where staff member Rebecca Rainey and others helped Johnny heal.
“He had lost a lot of weight and was just dealing with the trauma of being shot,” Rebecca remembers. “But he recovered quickly and very soon was engaging with his son and doing things to better himself.” Johnny eventually moved in with this girlfriend’s family and developed a good relationship with UCAN staff.
Johnny was soon able to obtain his GED and land a job. “By then I was so motivated. I would walk into the Riverdale office every day to get help with my GED, which I did for six months.” Johnny took his GED exam earlier this year and passed.
Johnny is presently enrolled in Kennedy King College studying business marketing. He hopes to be a marketing manager one day. “I want to open up my own business and build my own clientele. I am currently networking a lot and exploring the market. I would love to work for a billion dollar company or open up my own business. It’s a work in progress.”
When asked about violence in Chicago, Johnny says “Children need more focus and more attention paid to them. As you get older sometimes you look for guidance and don’t find it. Children need to feel like they are loved.”
At the end of it all, for Johnny the realization came soon enough.”I knew I was fighting for my life because I made dumb decisions. Now I am working really hard so that I can be there for my son. I want to make sure that he is loved and teach him to make better decisions than I did.”
*UCAN’s Transitional Living Program serves youth between the ages of 17 and a half and 21 who are under the care of DCFS. The program aims to assist youth in a supervised and structured setting to enhance their skills in developing healthy, supportive relationships and reaching self-sufficiency. To learn more about the program, visit our website.