Danielle Hamilton didn't think she had a future.

“I was focused on raising my brothers and sisters to make sure they had a future,” she recalls. Growing up with eight younger siblings and a mother who wasn’t around, Danielle handled most head of household responsibilities along with her older sister.  She remembers her younger siblings referring to her as “mother” before she was 14.

“I didn’t really have a childhood,” she explains, calmly and without anger. Now 17 years old, Danielle’s experiences could have broken her down, but she does not shy away from her past – or her future.

“When I look back on all the things I‘ve been through, it was only preparing me to be stronger for what the future holds,” she says.

But she didn’t always feel that way.

“My youngest sister died when she was five months [old]. I guess that’s when everything changed.”

After her sister’s death, Danielle and the rest of her siblings spent the next few months being shuffled between emergency foster care shelters and foster homes. Her first experience with a foster home, through the traditional foster care system, was not a good one. Eventually, she would transition to specialized foster care with UCAN after a stint in the hospital due to depression. She was moved to a new foster home, with a supportive foster mom, where she has been thriving for the past three years. Along with the move, she was given a new caseworker.

“Then I met Miss Takita. […] She got things done! She was like the Godfather to me!” Danielle laughs.

Tiquita Brewer, or “Miss Tiquita” as Danielle fondly calls her, is a caseworker at UCAN and the first to introduce her to the organization when Danielle was 15. 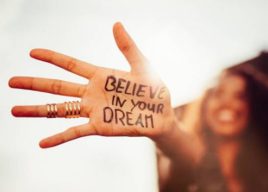 Her first day at DFLN was her birthday. Needless to say, Danielle was less than pleased to be there instead of celebrating with friends. But it did not take long for her to warm up to the DFLN program. She realized if she was going to attend, she wanted to take something from her time there. Before long, Danielle looked forward to attending DFLN every Saturday, and made dozens of new friends.

Today, a few weeks since the program concluded, Danielle sings a different tune. “I would recommend [DFLN] because it is life changing,” she says.

When asked to describe what she’s learned from DFLN, her message is powerful: “to be a revolutionary, and to be different. It’s okay to be different. […] Use your power for good. I want to change people’s lives. You know, I want people to feel that you can do anything you put your mind to.”

Despite a challenging past, DFLN has changed Danielle’s outlook on her future. “What I took mostly from it was to [be] an inspiration and [to] empower the youth,” she says. “The only thing I want to do is inspire, inspire, inspire.”

Danielle plans to continue to be an inspiration to other youth who have experienced hardships in their lives, reminding them, “everybody has a bright future.”