Home » Blog » You Can Slug Out Violence

But the game is not reserved just for our beloved boys of summer. Thanks to UCAN’s partnership with Lil’ Sluggers and Hamlin Park, it’s also for the future boys of summer. 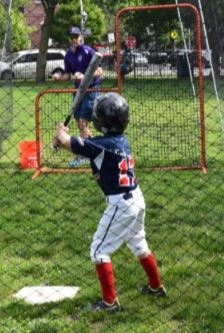 Each weekend in June, portable batting cages were set up in parks around the city and baseball fans as young as 5 were encouraged to fund raise in exchange for batting time, where voluntary coaches pitched to them. The smell of fresh cut glass hung in the air while boys and girls from numerous teams took their turn in the cages, all for a good cause — to Slug Out Violence!

“The idea was sparked by our newest Governing Board member, Susan McNally-Wilde, who wanted to introduce UCAN’s Violence Intervention & Prevention Programming to the parents and families of her son Sammy’s baseball league, along with Jeff Kapp, the founder of Lil Sluggers,” says Ann Kniola, Director of Development at UCAN. “We are thrilled that they raised over $6,000 in their inaugural year!”

Jeff Kapp designed the league to prepare boys and girls ages 2-10 for their journey into organized team play by improving and developing their social and physical skills on and off the field. Basic baseball fundamentals such as throwing, fielding, hitting, catching and base running are the core of the curriculum. The goal is to build confidence, reinforce team play, teach cooperation and help foster a real love for the game.

“Baseball taught me so much about life,” Kapp explains, “how to compete; how to fail; how to succeed; how to persevere through tough times.  I have so many great memories from playing the game at so many different levels that I wanted kids in the city, especially my kid, to have the same chance to create those memories and benefit from the lessons that the game teaches.”

Partnering with programs such as Lil’ Sluggers lets UCAN provide fun, innovative ways to fund raise while, at the same time, helping other youth in the community who truly need our support over the summer months.

All around, Slug Out Violence has been a grand slam!