For some, it’s grief. For others, it’s violence. And for many, it’s anger.

Jarvis Robinson was a high school freshman when his older brother, 23 at the time, was murdered: a victim of gun violence on the West Side of Chicago.

“I always had a lot of anger built up,” Jarvis recalls of his youth. “I would see stuff I didn’t really like – not in my household – but I’d see stuff.”

Jarvis and his 10 brothers and one sister grew up in Austin, which ranks among one of the most violent neighborhoods in Chicago.

Luckily, Jarvis found his passion in football from a young age. He remembers playing it as a child and thinking, “This is something I could do. This is something I like to do.” Football was his outlet, his own personal therapy.  It kept him away from trouble, and trouble away from him. But without the grades, he wouldn’t be able to play.

Used to being the star player in grammar school, Jarvis received many passes on his grades from his teachers. Once he reached high school at Collins Academy in North Lawndale, it all changed. When he saw how much work the older players put in, it was a shock.

“[The older players] had to go to class. They had to go to study hall everyday. They had to do a lot of stuff before they even got to touch the field. So I thought, I don’t know if this is what I still want to do. My grades freshman year – I just didn’t care,” he confesses.

With the loss of his brother, and struggling in school, Jarvis found himself at a low point in his life, often getting into fights, with pent up anger and no outlet.

Then he was introduced to Darryl Clayton, a clinical therapist at UCAN.

“[School] introduced me to Mr. Clayton, because they said I had a lot of built-up frustration. He just let me talk. I appreciated him because he taught me a lot, like different breathing techniques to calm down,” he remembers. “Then I met Ruben.”

Ruben Johnson, a development coach with UCAN’s Violence Intervention and Prevention Services, became Jarvis’s mentor, counselor and friend. The 360 Model is a school-based program that works with students, teachers and families to recognize the impact of violence and trauma in order to create safety and healing for students in schools.

“It’s funny how I met Ruben,” Jarvis laughs. “I was cursing out a teacher. Not cursing, but I was really mad at her. I was throwing a temper tantrum. Ruben talked to me, he told me, ‘Yeah, it’s messed up, but you just have to shrug it off.’ After that talk, he came to school for the next three weeks to check on me. Everyday.” 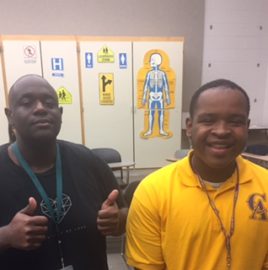 After those three weeks, Jarvis joined UCAN’s Violence Intervention and Prevention Services, hoping to find guidance in handling his anger and navigating his future. He wanted to go to college, play football and study sports communications.

Now, just beginning his senior year, Jarvis has been with UCAN and Ruben for nearly three years.

“I really love him so much,” Jarvis says of Ruben. “We go to games together, I’ve met his momma; she cooks for us. He makes sure that I’m staying focused on school all the time. Over spring break, we are looking at colleges to visit. We are looking at tuition. He came to school a few days ago just to make sure [I’m] on task. I’m trying to make sure I get good grades.”

After taking the SAT in his junior year and receiving high scores, he was placed into two AP classes and one honors class for his senior year.

But it’s not just Ruben who has helped Jarvis through his journey at UCAN. He is on a first name basis with much of the senior leadership team, UCAN President/CEO Zack Schrantz, and other program managers. When Jarvis visits the UCAN campus, he knows nearly everyone.

“I just love UCAN; they gave me guidance. They showed me how to put all my energy into something positive. They’re at all my games, no matter how far they are.  They support me. We talk. It’s like a big old family.”