Nathan Binns has been teaching business education in Chicago Public Schools for 13 years.

“I’ve taught at various schools all over the city,” he explains. “North Side, South Side, West Side. All different demographics and cultures. You name it, I’ve been on that side of town.”

He knows how important business and financial literacy is to a youth’s professional development, which is why he agreed to provide instruction for UCAN’s One Summer Chicago educational course (in collaboration with City of Chicago Department of Family and Support Services, and the Chicago Cook Workforce Partnership), The Magnetar Investment Program, for the past two years. 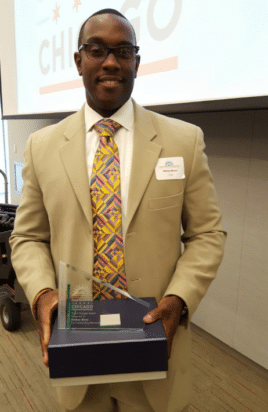 But in the beginning, it took some time for the youth to warm up to the class. “When you’re talking about stocks and beta scores and diversification, if you don’t establish a rapport, it can be like, ‘Why are we doing this?’”

Nate broke the ice with discussions about the community and the world, then brought in a personal guest speaker he uses in his classroom. “Those discussions really built our team. By week two, they bought in, and I could push that high level questioning with the content.”

Throughout the course they researched case studies, learned the financial world, participated in team competitions and researched businesses before taking trips to Google, Microsoft and DIRTT. “The trips were outstanding,” he recalls. “We look at the background and the history of the business, and their stock performance, so we are ready for a question and answer session. By the third trip they are so into it. No wants to be left out.”

His favorite part of the course was seeing the change in each youth as they progressed through the program. “I’ve seen a maturation, both years, between, ‘Okay, this is just another after school program,’ to, ‘I’m a player in the world economy. I might be a small player right now, but I see the vision of how I can become a bigger player.’

“I had a teenage mother or two who never had a job,” he goes on. “She went from, ‘I don’t know if I can write a resume’ to being on the winning team of the team challenge. I saw her entire world change.”

At the end of the program, each student was given $100 to invest. The next summer, a UCAN youth returned to show him their progress. “He showed me his portfolio. He had raised his investment to nearly $300. He had a 200% increase! He had a limited amount of money, but he wanted a diverse portfolio like he learned in class.”

After two successful summers with the program, Nate received a call from UCAN to learn he would be honored with the Mayor’s Game Changer Award at the Mayor’s Close Out Breakfast for One Summer Chicago. At the breakfast, teachers were awarded alongside students.

“I didn’t do this for an award,” he says. “Nobody on that stage, from employee to employer to student, expected to win an award, but the banquet was held to celebrate connections. It was cool.”

“The program was a great mix of the right people, the right curriculum, and young people who wanted something different,” he explains, and that’s what he attributes to its success.