Not many people can say they have been on a television set. Especially not in Chicago.

But since NBC launched the new Chicago-based series of Dick Wolf-produced shows “Chicago Fire,” “Chicago PD,” “Chicago Med” and (the ill-fated) “Chicago Justice,” thousands of Chicagoans have been hired in positions behind the camera or as extras – including UCAN youth Malik Moore, who was thrilled to learn he was going to be joining the crew of “Chicago PD.”

Malik grew up on the West Side of Chicago and spent most of his life in the city limits, which is why he’s always tried to take any opportunity that pushes him outside his comfort zone.

“I feel like knowledge is truly power,” he says.

He began his quest for new skills and knowledge with UCAN’s Workforce Development program One Summer Chicago Plus ( in collaboration the City of Chicago Department of Family and Support Services, and the Chicago Cook Workforce Partnership).

“I got my first job at the YMCA. It was cool having people supporting you and checking in with you and following up with you to see how you are doing, and I’m not used to having that kind of support.”

From there, he into transitioned into Summer Jobs and Beyond, another UCAN Workforce Development program, and began working in the restaurant industry.“Working these different jobs over the years really makes you a multi-skilled person,” he says. “I’m able to do different things.”

During another summer with One Summer Chicago, he participated in the Junior Investment Program, and learned how to invest the money he was earning. 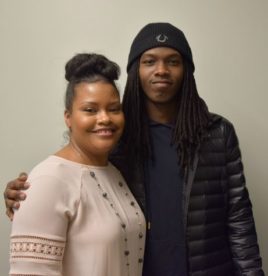 With the guidance of Ladon Brumfield, Project Manager of One Summer Chicago, and coaching from his Career Specialist Derrick Whitehead, and Violence Intervention and Prevention coach Patrick Daniels,  he was able to earn an internship with Cinespace Chicago Film Studios, where he works in the prop department for “Chicago PD.”

“We identified him as a candidate, prepped him for his interview, and then he went down there and knocked it out of the park,” says Ladon. “He got the last slot, and there were interviews after him.”

“Getting the job was great,” Malik says. “It’s different to see how things work on the other side of the film industry. You’re only shown so much on television, like 20% of the day. It’s crazy, it’s hectic!”

Working in the prop department isn’t exactly what he thought it was. “I always thought a prop would be anything around the actor,” explains Malik, “but props and set dressers are two different things. A prop is something the actor holds or comes in contact with, which is different than the set.”

Depending on the shoot, his hours and location vary. Some days he works up to 12 hours (with 14 being the max for non-interns).  “Just having the hours switch is so crazy, because you don’t know how much sleep you will get. When the sun goes down early, a lot of times we have to delay the shoot to another day. Sometimes we finish shoots on stage. But somehow, we always manage to complete the daily objectives.”

Malik doesn’t have a car, so he uses public transportation to get to and from each filming location, which is difficult but luckily his co-workers arranged a carpool. “They always make sure I get home safe,” he says. “It’s cool having people like that.”

His favorite part of the job is meeting new people. “Everywhere we go, we meet different people, from fans to new actors. Or going to a new location and meeting a new villain. I’m always meeting people with a different view and insight to life.  I’m fascinated by it. There’s so many different people.”

Malik confesses he loves movies and dubs himself a “film person,” but he is still unsure if television production is the professional path he wants to travel.

“I’ve worked so many different types of jobs and I have so many different skills. It’s great. UCAN has been in my corner for it all. Guidance helps you figure out your character, and UCAN has been that person for me. They pushed me, they have always been by my side. They want to see you do better, and it makes you want to do better. When you see them smile and know you put that on their face, it changes you as a person. UCAN has been great, and I know they got my back.”

Malik plans to attend college in the near future. “I’m proud to say I’m the first in my family who plans to go to college. I want to learn more and figure out what’s next.”