UCAN’s female mentoring group gleaned its name from a famous Maya Angelou poem, Phenomenal Woman, originally published in 1978. Despite the passage of time from then and now, the poem’s importance and powerful meaning endures.

The poem transcends time by touching women of all ages and in all stages of life. It’s rare to connect generations so seamlessly, and that special quality is not lost on UCAN staff members who secure the program’s guest speakers and present discussion topics.

One of the most poignant meetings this year occurred when UCAN’s Phenomenal Woman youth met the Sassy Hatters. 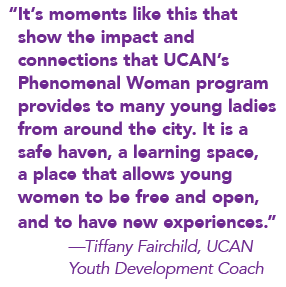 The program originated in 2009 to mirror that of Project Visible Man, UCAN’s male mentoring group that started in 2004. Through the group’s partnership with Police Officer Beamon, a retired female officer, they were able to host an “Intergenerational Dinner” with another group of ladies— the Sassy Hatters.

“They are an older group of women who have lived life to the fullest, even in their older age, and shared with the young ladies that life doesn’t stop when you reach a certain age,” Tiffany Fairchild, a Youth Development Coach at UCAN, says. “The youth showed a different side of themselves, smiling and serving a group of women that brought a wealth of knowledge and wisdom. They were an open book for the youth about life, parenthood, and why adults view youth/younger adults the way they do.”

The group all watched a women-centric documentary, Maya Angelou’s Top 10 Rules for Success, narrated by Maya Angelou and continued a discussion, and the meeting went past its scheduled time.

“By the end of this group session, I believe there was a newfound respect between the different generations based on what transpired during this time spent with each other,” says Tiffany.