“It’s not just about cutting hair; that’s only one aspect of being a barber,” explains Garland “G-Whiz” Fox of the Education & Artistic Team at Wahl Professional. The Illinois-based company, famous for its grooming products, partnered with UCAN and His & Hers Barber School to create the Wahl “Fade It Forward” Mentorship
Program. 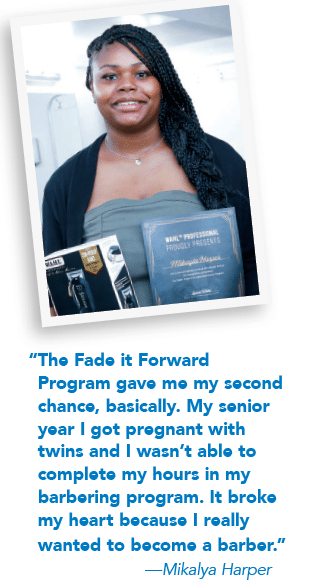 Selected youth from UCAN’s Workforce Development program participated in the four-week mentorship curriculum that immerses participants into the basics of barbering. Each participant was partnered with a seasoned mentor from Raze Up Grooming Lounge, Nyra’s Hair Design Salon and Pro Image Cutz Ltd. in Chicago.

“It’s paying it forward,” says mentor Brenda Potts. “That’s what it is to me, to pass it along. To help (youth) get the foundation they need before they even get (to barber school). It’s a privilege.”

G-Whiz explains the importance of a mentor: “It’s the mentor’s job to build (the youth) back up and instill within them values, morals, virtues, work ethic and professionalism. We want them to be the next product owners, the product developers, engineers. We want them to go to heights that they never thought they could go to from cutting hair.”

Mikalya Harper, Andre Whittington, Quientin Crump and Sebastian Moore received full scholarships to His & Hers Barber School in Chicago. But the program meant so much more than a scholarship.

“The Fade it Forward Program gave me my second chance, basically,” says Harper. “My senior year I got pregnant with twins and I wasn’t able to complete my hours in my barbering program. It broke my heart because I really wanted to become a barber.”

For Sebastian Moore, it meant a fully formed future. “It helped someone like me transition from unemployment to my own career path,” he says.

He also learned that being a barber went beyond cutting hair. “A barber can lift someone’s self-esteem. They can make someone feel better about themselves. They are a therapist, they are a pillar in the community,” says Moore. “To see other barbers become owners and operators after going through this same system that I’m about to go through, it’s extremely motivating.”