Chase Larkin is a living, breathing example of UCAN’s vision and mission: he went from passively attending a youth group to leading it.

Chase spent his childhood in Harvey, Illinois, with his mother, grandmother and sister as well as his extended family as neighbors. On weekends, Chase would spend time with his father’s family on Chicago’s South Side at 93rd Street and Blackstone Avenue.  In both instances, while Chase was surrounded by a community of people who cared about his welfare, there also existed the external influences of gangs and drugs, something both of his parents wanted him to avoid.

So, when in fifth grade, his father relocated to Country Club Hills and invited Chase and his brother to come and live with him.

“I wanted to live with my dad and my brother. I had never had that before,” says Chase. “So we moved out there, but my mind wasn’t ready for that environment. I brought a lot of 93rd and Blackstone with me and a lot of Harvey mentality to a peaceful neighborhood. I started to get into a little trouble and my grades started to slip and my mom noticed. Fast forward to high school, my mom started working at UCAN.” 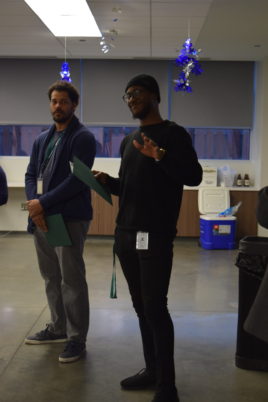 In 2006, Chase’s mother, Michael Ann Wiley, joined UCAN. She met Fred Long, the current Vice President of Development, who had grown up in UCAN programming. Fred told Michael Ann about a male mentoring program called Project Visible Man (PVM), and she immediately knew Chase should be in it.

She picked him up every Wednesday after school and drove him across the city to the group. At 16, it was a new experience for Chase, and it took him six months for him to begin to open up.

“At that time I just wasn’t ready to hear it. I was like, ‘I’m fine doing exactly what I’m doing.’ But as time passed people really just started being more invested in my life. I would see Fred on non-PVM days and he would ask me how I’m doing, and Claude [Robinson, Executive Vice President of External Affairs & Diversity] would too.”

Jason Daniels, a Youth Development Coach at UCAN, would also help get Chase more engaged in the group. It didn’t take long before Chase was fully invested. Soon after, Claude had Chase began to go on exposure outings via the Striving To Achieve Realistic Success (STARs) program.

By 18, Chase was facilitating PVM. By 19, he was officially a UCAN employee as a Youth Development Coach.

“It brought out new qualities and skills that I didn’t know I had,” he says of leading PVM. For most of his life, he thought he wanted to be a lawyer, but after being in PVM and taking a few college courses in the field, he learned it wasn’t the right fit. He realized, however, he would have come to that conclusion sooner had he taken the opportunity of a summer internship at a law office during high school.

“If I would have done that internship, I probably would have figured it out before I took these classes. I was just like, ‘I need to be more intentional about taking opportunities even if they may not sound fun or immediately beneficial, I need to start thinking more long term.’”

There was one moment that made Chase realize this was what he truly wanted to do. It was at “Learn and Earn,” a program in which high school youth attended an event to learn reading, writing, arithmetic and life skills.

“A youth got mad at a young lady and he punched a hole in the wall. I remember sitting down and having a very good conversation about life in general and it had very little to do with him punching the wall, but it had to do with managing emotions and being productive. We had a very good talk and when he walked away, I could tell during the rest of the program, he would be very intentional about not getting in trouble. It was that one conversation that made all the difference, and it wasn’t even about punching the wall. We just talked.”

After that, Chase knew he was on the right path.

“This is my passion. I really enjoy gathering as much information as possible and learn, and I really enjoy spreading that knowledge and see it be beneficial to someone else. My belief is that all the information that I get is not always for me. It’s selfish of me to hold on to that and not spread it along. I think about the knowledge that I have now, that I didn’t have when I at 16 and 15, it would be selfish of me to not reach out to the 13 year old and say, “Listen, this is something you might need.’”

After 11 years as a UCAN employee, Chase reflects on what his career has taught him.

This year, Chase was honored with a UCAN President’s Coin to recognize his spirit, service and teamwork.