Home » Blog » I Think I Saved a Life Today

Decades ago, he was a gang chief. Today, he’s helping youth on Chicago’s West Side follow a different path.

“They tell you not to take your job home with you but… you do,” says Martin “Marty” Murff, a program supervisor with UCAN’s Violence Intervention and Prevention Services. “It’s redemption, for me; that I’m giving back to a lot of what I may have destroyed, personally. I can go to bed with a smile like, I think I saved a life today. It helped me.”

Marty started with Cure Violence, formerly CeaseFire, as a violence interrupter around 2009, which is a role focused on interrupting the cycle of retaliatory violence. The goal is to intervene in a situation before it turns violent. It requires trust, relationship building and knowledge of the community. The role was made for charismatic Marty, who was born and raised in North Lawndale. Fast forward to 2016, Marty joins the UCAN group of violence interrupters as a Youth Development Coach during the early stages of our Violence Intervention and Prevention Services (VIPS) initiative.

“Violence interrupters are the first ones. They are like the firefighters, they are on the front lines,”says Marty. “They are out on the streets, they hear what’s going on [in the community] and they do a lot of mediations.”

Mediations are critical in stopping violence before it starts or before retaliation. “If I hear that this group got into it with this group, we’d try to help both groups to play defense,” Marty explains. “What I mean by that is, if they don’t come at you, you don’t go at them. I try to keep both sides from going looking for trouble. That’s worked for me and for us to knock the violence down.” 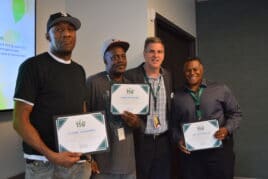 Today Marty serves as a program supervisor in VIPS, a role that requires strategically placing outreach workers where they have previous relationships and can have the biggest impact. “We canvas the community. When the community starts trusting you, the community starts calling you. They’ll be like ‘hey Marty man, so-and-so got into such-and-such so there might be retaliation.’ Then we go out and shadow, to try to see who the key persons are that got into it, because we have different outreach workers who are in different cliques.”

Next comes the actual mediation. “We will take one or two people from each group and take them outside their neighborhood – outside their norm. Go out to eat or something, and have them sit down and talk. I still shadow it, but I allow them to squash it or come to an agreeance.”

Because of the importance of previous relationships with the community, most of the outreach workers are from North Lawndale. “If you aren’t from here, it’s hard to make a difference; it’s hard for [the youth] to relate to us. I’ll tell them my name and they will be like, ‘you’re Marty? My dad used to talk about you.’ And I can tell them ‘man, your dad is talking about a Marty from 30 years ago.’ We grow and develop. And they can relate. They can see like, you used to be where we are.”

That connection is crucial. It’s the bedrock of trust that can evolve into a deeper relationship with UCAN and the community. Outreach workers often refer youth to programs and services we provide such as READI (Rapid Employment And Development Initiative) and RISE (Restoring Individuals through Supportive Environments).

“You’ll see me in the office, but the team, they are on the streets. They have the relationships with high risk individuals.  We figure out where to refer them,” says Marty.

The outreach team’s dedication over the years has grown both VIPS and UCAN’s connection to the community immensely. “The [relationship with UCAN and the community] has changed drastically since we moved [to North Lawndale]. There used to be a lot of outside organizations that came into the community and took out, without giving back. They were afraid we would take too. But now we’ve proved that we aren’t taking – we are giving. That changed the outlook of UCAN. The trust is there.”

Because of that trust, the community even reaches out to UCAN for intervention. “Sometimes the community will call at 2 in the morning about something that happened. It’s a 24 hour job. We will get up and see how we can intervene or how we can calm it down. Some stuff you can’t stop, but a lot stuff you can.”