Home » Blog » I Want to See How Far It Takes Me

It’s been over two years since Anthony “Tony” Green returned from his trip to India with the Peace Exchange, a local Chicago nonprofit that UCAN partners with, which aims to “prepare young Chicagoans to be leaders, role models, mentors and peacemakers through education, transformational travel and outreach to youth.”

After his trip, we caught up with him to learn about it. Today, he’s still part of the UCAN community.

Patrick Daniels, Program Supervisor in our Violence Intervention and Prevention Services (VIPS), said, Tony was one of the “original guys in VIPS.” He joined in 2016, when the program was in its early stages.

Soon thereafter, Patrick connected Tony with the Workforce Development program, which helped him get a job at Walgreens, where he still works today. Patrick also encouraged Tony to become a Peace Builder with the Peacekeepers, leading to an 80-hour course to become a peace ambassador and a trip to India. 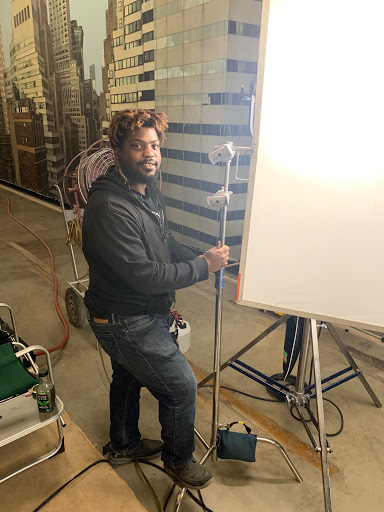 Most recently, Tony’s involvement with Workforce Development led him to apply for the Mirkopoulos Internship Program, created by the CineCares Foundation (of Cinespace). This program was designed to help young adults aged 18-26, from undeserved communities on Chicago’s West and South sides, train for TV/film industry jobs.

Tony was selected as an intern and recently completed the six-month program as a grip whose job is to provide support to both the camera department and the electrical department.

“The main thing we do is help shape light for the scenes the way that the director of photography wants it,” Tony describes. “We also support other departments in other needs, like if they need us to build something. But it was a pretty fun experience. I enjoy every day that I get to do it.”

He mainly has worked on Fox’s “Empire” but now that he is officially in the union, he could get called to work by any studio at CineSpace. Being in the union is a huge achievement, as you have to be voted in.

“I love it. I want to see how far it takes me,” he says of the work. “I like doing the grip work but I’m interested in special effects too. We got a chance to do a car explosion. Or get a chance to work on a movie. I’ve met a lot of people who have worked on shows or movies I watched growing up so it would be interesting seeing how it differs.”

When reflecting on what he’s learned he says, “You have to be confident. It’s a crowded space. It was lot I had to learn. Stuff can change quick, and you have to be able to adapt. It’s eventful.”

Between juggling his union job as a grip and his job at Walgreens, Tony is busy, but we can’t wait to see what he does next.